Why Did People Use Cigarette Tin Cases?

In today’s world, people use different things to store their belongings, and among the most common items people use is a cigarette tin case.

You might be asking yourself why anyone would want to use one, but I am sure you have seen them in the past. In the past, they were quite large and bulky and didn’t look very nice. 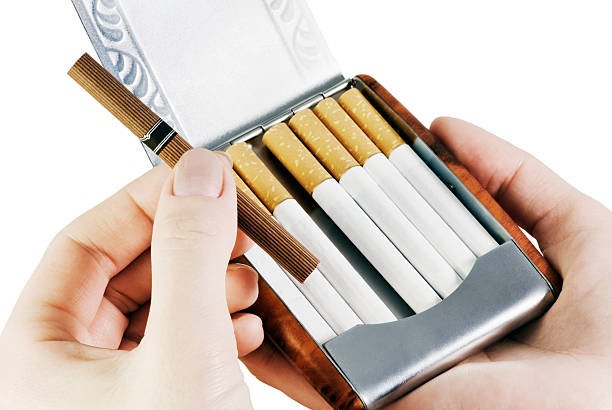 However, there are many types of tin cases on the market, some of which can be made from tin cans.

When people used to buy cigarette tin cases from the local store, they would throw their cigarettes in there with other dirty trash.

The truth was that cigarette smoke is quite harmful to people, and nobody wants to inhale it.

However, if they were stuck in a case, they had no choice but to throw their cigarette out, which was rather easy because the case was so big.

What is a Cigarette Tin Case?

A cigarette tin case or a cigarette case is a container to hold and carry cigarettes without damaging them. It prevents their crushing. Conventional cigarette cases have a flat structure generally composed of metal. 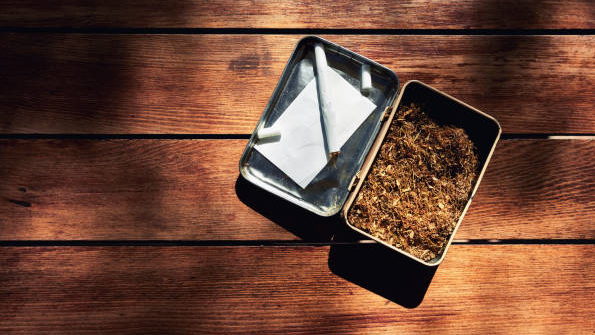 The shape of cigarette tin cases is sleek and rectangular. To make them pocket-friendly, the sides of the case are rounded.

The cigarette case contains one hinged edge, which makes the case open into two symmetrical halves. Both these halves hold cigarettes.

Let’s talk about antique cigarette tin cases. They hold approximately 8 to 10 cigarettes because today’s cigarettes are longer and slimmer than the cigarettes manufactured in the nineteenth and early twentieth century.

Cigarette tin cases also have an attached elastic strap, which holds the cigarettes in place irrespective of the side opened.

The History of Cigarette Tin Case

Conventionally, when cigarette cases were invented, they were used for a single purpose: to save light cigarettes from crushing while someone carries them inside their pocket.

But very soon, cigarette tin cases jumped from a utility device to a style statement. Many cigarette cases are manufactured so that they open up like a book.

However, they are also designed as a large boxes, but most are travel-friendly and easy to carry, completely ironical to a cigar humidor.

The cases were rounded along with opulent surfaces. The thumbpiece of the cigarette tin case was embedded with a queue of small rose diamonds.

After the 1920s, Art Deco cigarette boxes were made up of the well-smoothen surface of sterling.

They also had strapped covers that were the shape of Mayan Temples. Later in the 1940s, laminated slabs of Bakelite were used as the main material for producing home cigarette boxes.

Around the end of the Victorian era, cigarette cases were styled with matching Vesta cases. The Vesta cases were made for keeping friction matches called vistas.

One peculiar trait of the vista cases was that they had a rugged region somewhere on the case, most probably at the bottom, to lighten the Vesta. Later in the first World War, cigarette smoking was famous and considered elegant.

After that, Paris was the hub of cigarette case design. Raymond Templier was a Parisian designer who designed lacquered and silver-and-enamel cases.

Cartier and Van Cleef & Arpels were the French jewelers who designed the cases embedded with diamonds and gemstones. 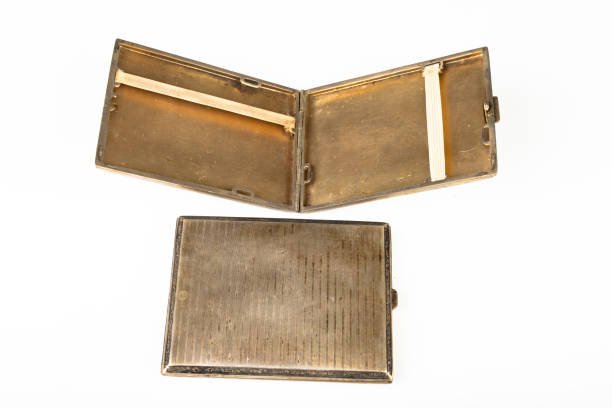 However, not every cigarette case is that good because they are small and easy to get, so the larger ones with intensively worked candelabra are more of their choice.

The flat-fifties cigarette tin cases were the most functional among all the designs because they could carry 50 cigarettes in total, with 25 cigarettes on each half of the case.

Flat-fifties tins were manufactured by every brand, like Camel, Sweet Caporal, Players, Chesterfield, etc. The best company to manufacture the flat-fifties was Lucky Strikes.

In the 1930s, they also packaged cases with a card from the 50 cards used to describe a bridge hand.

They also included instructions for playing the bridge hand from famous players like Milton Work inside the card.

While the company also made endorsements featuring celebrities of that time like Miss America, Douglas Fairbanks, etc.

Why do you need Cigarette Tin Case?

The case packer is beneficial as its material is metal, which helps store the packs and protect them because of its rigidity.

While on the opposite shore, the polythene wrapper provides a low-cost pack that consumes less warehouse space, palletizing, and distribution.

According to a monitor of the cigarette market, the tobacco companies started using various limited-edition and fully-branded packs and tins that can be used again.

This was the trend during the initial three months of the transition period of the tobacco companies.

The monitor included trade press and online supermarkets, along with timely tours of the stores. They also used innovative inner foil that could be sealed again for a brand of cigarettes.

What Are The Advantages of Cigarette Tin Cases?

At this time, cigarette cases were not just containers; instead, they came out as an accessory that was also functional and proviprovided utility.

In modern society, cigarette cases are used by both men and women. They provide a great accessory and styling prop and safeguard the cigarettes from crushing or other damages.

The most amazing part is that a single person can own several styles and designs of cigarette cases, matching their situations and taste. The cigarette cases are made informal as well as in daily everyday use.

Cigarette cases are made in many styles and designs. As time flies, the fame of cigarette boxes also continues to rise. Globally, they are used by many people of different cultures.

This is because cigarette tin cases are not just an accessory but a functional daily-use item.

The main aim of cigarette cases is to safeguard your cigarettes, and, of course, it is important because tobacco prices are very high.

On top of that, the cigarette tin case helps people carry the cigarettes wherever they want, even if they buy them from stores or make one for themselves.

Nowadays, people have found other uses for cigarette cases, like keeping and carrying their IDs, credit cards, and sometimes even their phones.

So when you think about why cigarette cases are getting very famous, the answer is simply that all the benefits that integrate fashion and functionality are the main reasons.

What Are The Types of Cigarette Tin Cases?

A cigarette box is more common to function with a cigar humidor. It is big and keeps many cigarettes the guests or host can utilize.

The cigarette box is mostly constructed from glass, wood, metal, or ceramic. It is usually kept on the desks or tables.

If we talk about the trends in smoking culture, then cigarette cases are very fashionable accessories. They can be constructed from high-end metals or embedded with jewels, gemstones, etc.

The famous designer of Faberge eggs, Peter Carl Faberge, also produced opulent cases of gold and gems for the Tsar Family. As of now, some of them cost over $25,000.

Cigarette cases are also collectible items. Cole Porter’s spouse, Linda, gifted him a cigarette case taken from Cartier at every opening of his new Broadway Productions.

Every cigarette case was mesmerizingly beautiful, made with gold, leather, and silver with embedded stones, and often styled according to the show’s theme.

Mostly silver cigarette cases are just plated with chrome. There are some silver-plated and aluminum-finished cases, along with real sterling cases.

Many soldiers also said that during World War I and II, cigarette cases helped them dodge bullets and saved their lives by blocking them, like James Doohan.

How to choose Cigarette Tin Cases?

The cigarette tin cases are often manufactured in the same pattern as slim and rectangular shapes, either built-in silver or tin with a few ornamental decorations.

In some cases, they also have an elastic strap and can surface with high-end metals. 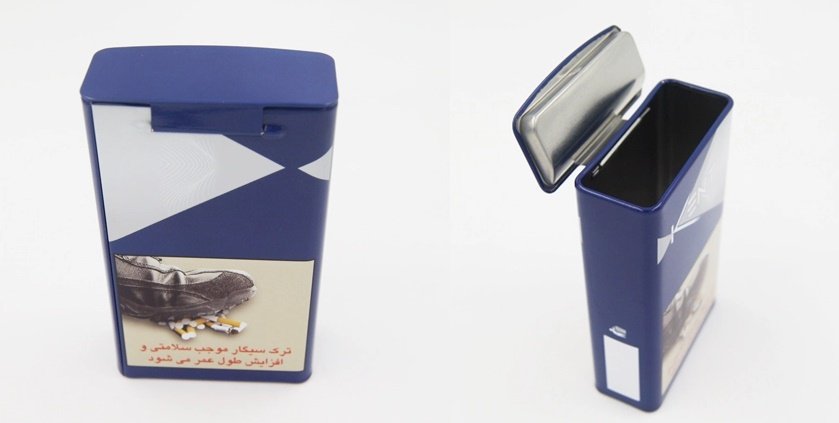 While for the richer class or royal smokers of the society, there are other options like cigarette cases made up of gold and embedded with precious gems.

It was Faberge who started making such opulent cigarette cases for wealthy people. Rare pieces of Faberge’s production can cost around $200,000 in an auction.

Currently, we have categorized cigarette cases into two sections, named antique and modern. The first one is the epitome of functionality while integrating a calendar and clock with a sleek platinum finish.

This was astonishing to witness the modernization of an old concept of a cigarette box. Cartier decided to produce these pieces in a limited number; he only produced 2000 pieces of this cigarette box worldwide.

You don’t need to buy any random cigarette tin case nowadays, as various designs and personalization options are available.

You can also choose them as a present for a special one because they have mesmerizing designs.

On top of that, you can get them engraved for free from the best online seller. You can gift them to your best friend or a relative on a special occasion if they smoke.

They can also get engraved with their name or initials, keeping the cigarette tin case minimal but elegant at the same time.

The case can also be customized to communicate any message you want to give to your special one.

When trying to find an ideal cigar box, ponder about your friend’s lifestyle. Would you please think of the people he meets with, like someone with a simple lifestyle or opulewealthyle?

If you have a friend with rich business associates, choosing a high-end and opulent-looking cigar box will be the best option.

If your friend is a simple professional, you can choose a cigar box with engravings.

You can get their name engraved on it or give a special message; you can also try a logo reflecting their career.

There are also options for a double-purpose case that can hold cigarettes and cards.

How big is a cigarette case?

Generally, the cigarette case is about 84mm in size.

How much does a cigarette case cost?

You can get a good cigarette case in the price range of USD 3 to USD 280. However, vintage or embossed cases are highly-priced.

Even with the flowing waves of time and change in fashion trends, the cigarette tin cases have a versatile touch that always radiates the vibes of class and chic.

When in the 20th century, the tobacco industry was on the top, many elite collectors preferred cigarette tin cases made by their jewelers with a touch of affluence.

Other names, like Scott Fitzgerald, and Ronald Reagan, endorsed Chesterfield cigarettes in the 1950s. Princess Margaret, who owned a cigarette case of tortoiseshell, was also associated with the glamour of cigarette cases.

At that time, the smoking accessories of a person were the measurement of their taste and elegance.

When colorful advertising illustrations came into existence, they were filled with talking about the health benefits of each brand.

Smoking was a statement of being fashionable for several years worldwide. But now we know that smoking harms health, and these astonishing cigarettes in cases of the past make an amazing entity for antique collectors.

Why Do You Need a Tea Tin Storage To Store Tea? Scroll to top